The World is Flat (and way smaller than you think)

Before you make up your mind about globalization, as if globalization cared, please read The World is Flat, Thomas L. Friedman's bestseller, subtitled A Brief History of the Twenty-First Century.

The book is endlessly interesting. I could pick any section to quote, but one chapter in particular held me spellbound. Friedman has just bought a Dell laptop, and he asked Dell to trace the "global supply chain" that led to his Inspirion 600m's arrival at his door.... (Note: nothing's changed here but the paragraphing: I just can't stand paragraphs hundreds of words long.)

"My computer was conceived when I phoned Dell's 800 number on April 2, 2004, and was connected to sales representative Mujteba Naqvi, who immediately entered my order into Dell's order management system.

He typed in both the type of notebook I ordered as well as the special features I wanted, along with my personal information, shipping address, billing address, and credit card information. My credit card was verified by Dell through its work flow connection with Visa, and my order was then released to Dell's production system.

"These SLCs are like staging areas. If you are a Dell supplier anywhere in the world, your job is to keep your SLC full of your specific parts so they can constantly be trucked over to the Dell factory for just-in-time manufacturing.

"'In an average day, we sell 140,000 to 150,000 computers,' explained Dick Hunter, one of Dell's three global production managers. 'Those orders come in over Dell.com or over the telephone. As soon as those orders come in, our suppliers know about it. They get a signal based on every component in the machine you ordered, so the supplier knows just what he has to deliver.

"'If you are supplying power cords for desktops, you can see minute by minute how many power cords you are going to have to deliver. '

"Every two hours, the Dell factory in Penang sends an email to the various SLCs nearby, telling each one what parts and what quantities those parts it wants delivered within the next ninety minutes - and not one minute later.

"Within ninety minutes, trucks from the various SLCs around Penang pull up to the Dell manufacturing plant and unload the parts needed for all those notebooks ordered in the last two hours. This goes on all day, every two hours. As soon as those parts arrive at the factory, it takes thirty minutes for Dell employees to unload the parts, register their bar codes, and put them in the bins for assembly.

"'We know where every part in every SLC is in the Dell system at all times,' said Hunter.

"So where did the parts for my notebook come from? I asked Hunter. To begin with, the notebook was codesigned in Austin, Texas and in Taiwan by a team of Dell engineers and a team of Taiwanese notebook designers."

"Where did those parts come from? Dell uses multiple suppliers for most of the thirty key components that go into its notebooks. That way if one supplier breaks down or cannot meet a surge in demand, Dell is not left in the lurch. So here are the key suppliers for my Inspirion 600m notebook:

The LCD display was made in either South Korea (Samsung or LG Philips LCD), Japan (Toshiba or Sharp), or Taiwan (Chi Mei Optoelectronics, Hannstar Display, or AU Optronics).

Friedman's description of the supply chain goes on for two more pages. Then, in Nashville, USA, it is made into the notebook Friedman will see when he opens the Dell box:

"That was thirteen days after I'd ordered it. Had there not been a parts delay in Malaysia when my order first arrived, the time between when I phoned in my purchase, when the notebook was assembled in Penang, and its arrival in Nashville would have been only four days.

"Hunter said the total supply chain for my computer, including suppliers of suppliers, involved about four hundred companies in N. America, Europe, and primarily Asia, but with thirty key players."

I don't know that I, your humble blogger, have anything to add. Anything missing?

The World is Flat, Copyright 2005 by Thomas L. Friedman
Farrar, Straus and Giroux, NY, NY
Posted by Maynard at 8:48 AM

Nice and quite informative post. I really look forward to your other posts. 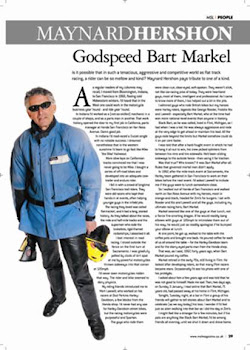 As I put up (on my blog page) links to magazines that feature my work....

If you read my blog and are aware of such links, let me know, please. Funny, for years I didn't care about my stuff appearing online. Now I'm disappointed to see that it doesn't....

My work in magazines

From the clip 'n' strap crypt Riding my lovely old Bultaco 200 Matador, I am about to flip over backward on the very steep grade of FH Hill, near Bloomington IN. Had I been a better rider, I would have been the first person to climb that hill on a mere 200... Sigh...

In this shot taken by a friend, I'm winding down with a cigarette after road-racing my motorcycle on a circuit in northern Ohio. I'd borrowed the leathers I'm wearing, the van I drove to get there and the money I spent to put gas in its tank. I probably bummed that cigarette... At Trenton, NJ, Bart and I provide "neutral" wheel and mechanical support for racers from all teams. We typically follow the breakaway; team support cars are not permitted to enter the gap between pack and break until the gap grows to over a minute...